Nomination for Technical Award for an excellent combination of set, lighting and sound design.

Chris Dunn nominated for Best Actor for the part of Jeeves.

The Happiest Days of Your Life 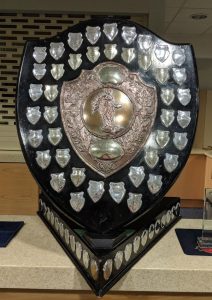 Abbie Jones nominated for Merit Award for Puppeteer for Sammy the Dog.

Nomination for Technical Award for Detailed lighting plot and great use of music throughout the production.

Abbie Jones nominated for Best Actress for her part as Catherine.