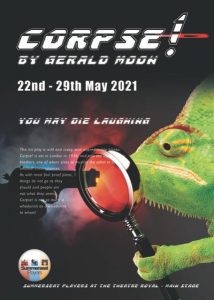 Think of Sleuth crossed with Deathtrap crossed with a Feydeau and you’ll have an idea of the wild and crazy, unpredictable hijinks in this hit play. Corpse! is set in London in 1936, and tells the story of twin brothers, one of whom plots to murder the other in the most unusual circumstances. Evelyn, an out of work actor, engages the genial Irishman Powell, with a shady past, to do away with his suave, sophisticated, monied twin. Their plotting in Evelyn’s Aladdin’s cave of a flat is punctuated by the visits of a delightfully theatrical landlady. As with most fool proof plans, things do not go as they should and people are not what they seem. Corpse! is not so much a whodunnit as a whodunnit to whom!