A Studio production – not part of the patron’s scheme. 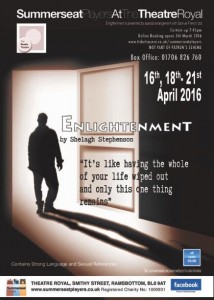 Adam, a 20-year-old student, has gone traveling but has failed to return. His nice middle-class mother, Lia, is devastated and seeks solace from a psychic. His stepfather, Nick, is equally upset, but more level-headed. Lia’s father, Gordon, a former Labour MP, has a practical idea: he introduces his daughter to Joanna, a television producer who wants to make a series about missing people. Then an unexpected event happens, and a young man called Adam appears.

As the scenes flash by, the play’s themes deepen. Lia is not only thrown completely off-balance by the disappearance of her son, but her whole view of life is turned upside down. Her Enlightenment values of tolerance and goodness are called into question, and what finally enlightens her are her own terrible experiences. In the process, she — a do-gooding liberal — is forced to criticise the West’s view of the world, its materialism and its apparent immunity to terror. Lia responds not by relying on a stiff upper lip, but by excavating her deepest emotions.

The Patron Scheme does not apply to this performance.

Tickets can be obtained online, by clicking on online tickets